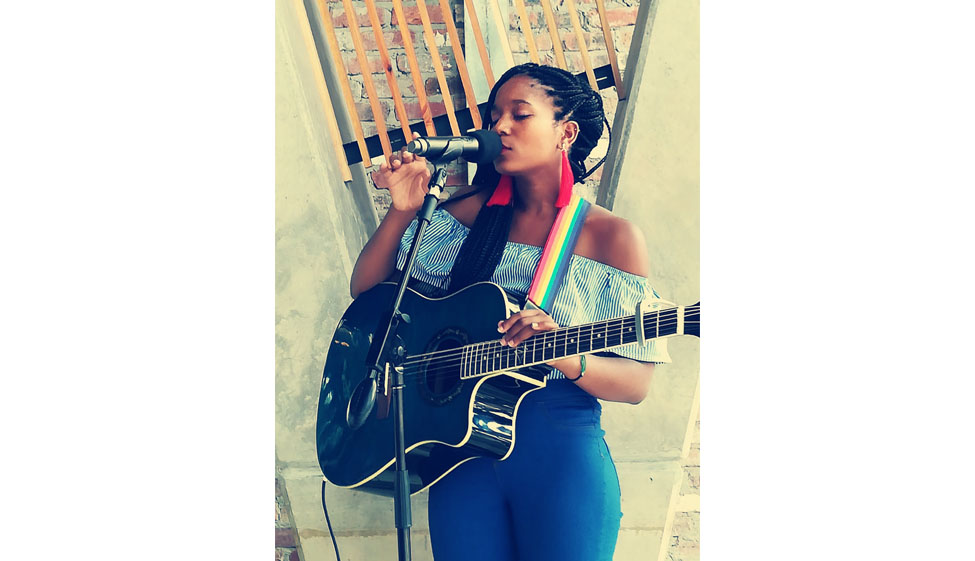 Born to a single mother who moved to Cape Town without any familial support structure, Angela dealt with the hardships of life by drawing solace from music and poetry, already at a young age. Falling in love with this parallel dimension of creativity and soaring spirituality, she joined the school choir at the age of 8, continuing to sing throughout her school career. Winning a poetry competition made her realise that other people liked the way she assembled words too. This lead on to the acquisition of her first guitar at the age of 9 and exploring songwriting and melody composition.

Unfortunately at the time, Angela's mother didn't see a point to her daughter pursuing music in all earnestness and forbade Angela from taking the subject at school. But this didn't stop the aspiring musician from doing what felt right to her. Collaborating with everyone and anyone who could feed her thirst for knowledge and skill, she volunteered for school musicals and theatrical productions as well as joining extra-curricular drama classes. It is here where she got her first taste of proper singing, microphone and stage techniques. Ending high school on an even higher note, she was selected as the soloist for her school house in the annual singing competition and won 'Best Song'!

After matric, Angela started playing at open mic events like the Armchair Lounge, Alma Cafe and Barleycorn, doing classic covers of various genres but dedicating equal stage time to her own material. Getting lessons in singing and guitar from teachers at various established Cape Town music schools, she met and worked with prominent musicians like Zane (Malawi) and Walter Spearheart (Nigeria). They inspired her to get into a recording studio and lay down some tracks. Angela released her first album, Human, in 2017.

Ever consumed with building her experience and expertise, Angela also supplements her income by playing gigs, either as a solo act or with her band, in a diverse array of iconic venues around the Mother City. These include amongst others: the Radisson Red Rooftop, Quay Four, Alexander Bar, Striped Horse (Muizenberg), Vic Bar, Nomad, Buskers Festival (Waterfront) , Gugu'sthebe (Gugulethu), Col'cacchio, Beluga, Mojo Market (Sea Point) and Freedom Bakery (Diep River).

Proud marked achievements so far are: making it through to the live auditions selection on SABC's SA's Got Talent and M-Net's The Voice, playing at the International Miss Malawi Beauty Pageant 2018 and winning Best Song Performance at Cape Town Exposed in the City Hall auditorium. Angela is honoured to have had Mr. Dan Plato, Mayor of Cape Town, personally hand her the award. Exciting upcoming events on her calendar are: playing at this year's Subterranean Rhythm and Blues (STRAB) Festival in Ponta Malongane (Mozambique), a high profile private event at the De Hoop Reserve and getting into the studio to start with recording her next album.

Having achieved notable success relatively early on in her career, is a testament to Angela's passion and determination to succeed. Currently enrolled at the Cape Peninsula University of Technology, she is half way through a diploma course in Entrepreneurship, simultaneously working as a restaurant hostess, waiter and promo agent to support herself and her music. Hard work coupled with a solid dose of humility and compassion, stand her in good stead in reaching her goals. Success to Angela is the realisation of her dream, to inspire others never to give up and to take care of her family.