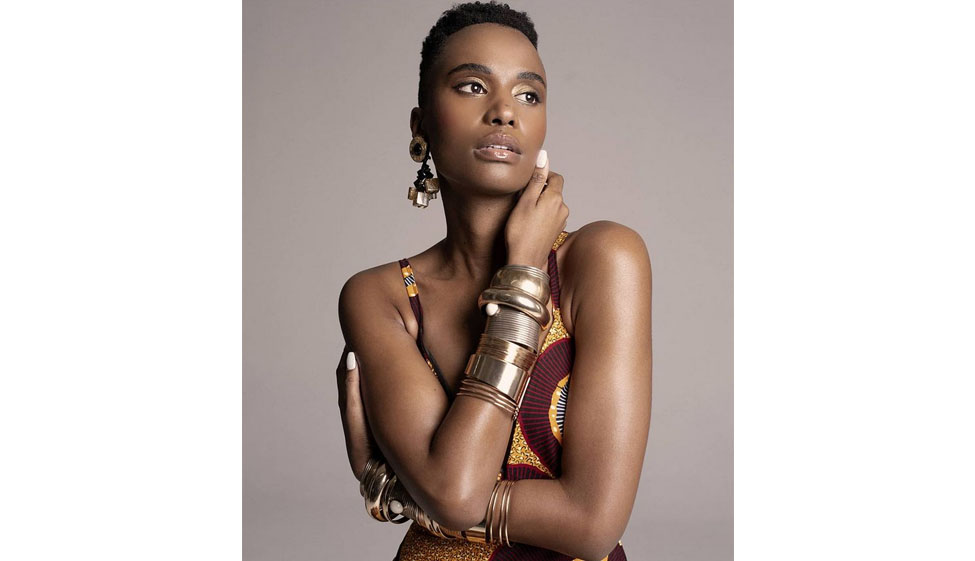 Prior to winning Miss South Africa, Tunzi was completing a Bachelor of Technology graduate degree in public relations management at Cape Peninsula University of Technology and worked as a graduate intern in the public relations department of Ogilvy Cape Town. As Miss Universe, Tunzi will reside in New York City, and will take part in several events and appearances throughout the world.

Tunzi was born in Tsolo, Eastern Cape to parents Philiswa Nadapu and Lungisa Tunzi, and raised in the nearby village of Sidwadweni. Tunzi is one of three sisters. She later moved to Cape Town, settling in the Gardens suburb, to attend Cape Peninsula University of Technology, where she graduated with a bachelor's degree in public relations and image management in 2018. In 2017, Tunzi was working as a model and living in East London.

After being selected as one of the finalists, Tunzi went on to compete in the Miss South Africa 2019 pageant in Pretoria on 9 August. She progressed through the stages of the final, advancing to the top ten, then top five, and finally the top two until she was crowned the winner by predecessor Tamaryn Green, besting runner-up Sasha-Lee Olivier. Following her win, Tunzi received prizes including R1 million, a new car, and a fully furnished apartment in the Sandton neighbourhood of Johannesburg, which is valued at R5 million, for her to use throughout her reign. The achievement allowed Tunzi to represent South Africa at the Miss Universe 2019 competition.

Tunzi arrived in Atlanta, Georgia for Miss Universe 2019 in November 2019. She competed in the preliminaries on 6 December and competed in the finals on 8 December at Tyler Perry Studios. During the competition, Tunzi advanced to the top twenty as the first semi-finalist for the Africa/Asia-Pacific continental region. She then advanced to the top ten, then the top five, and ultimately the final three. By the end of the event, Tunzi was crowned Miss Universe 2019 by outgoing titleholder Catriona Gray of the Philippines, besting first runner-up Madison Anderson of Puerto Rico and second runner-up Sofía Aragón of Mexico. Tunzi's win is South Africa's third Miss Universe crown; she is the first black woman to win the Miss Universe title since Leila Lopes was crowned Miss Universe 2011, and the first to do so with afro-textured hair. During the final round, the top three were each asked the same question: "What is the most important thing we should teach young girls today? To which Tunzi replied:
"I think the most important thing we should be teaching young girls today is leadership. It's something that has been lacking in young girls and women for a very long time, not because we don't want to but because of what society has labelled women to be. I think we are the most powerful beings in the world and that we should be given every opportunity and that is what we should be teaching these young girls, to take up space, nothing is as important as taking up space in society and cementing yourself, thank you. "