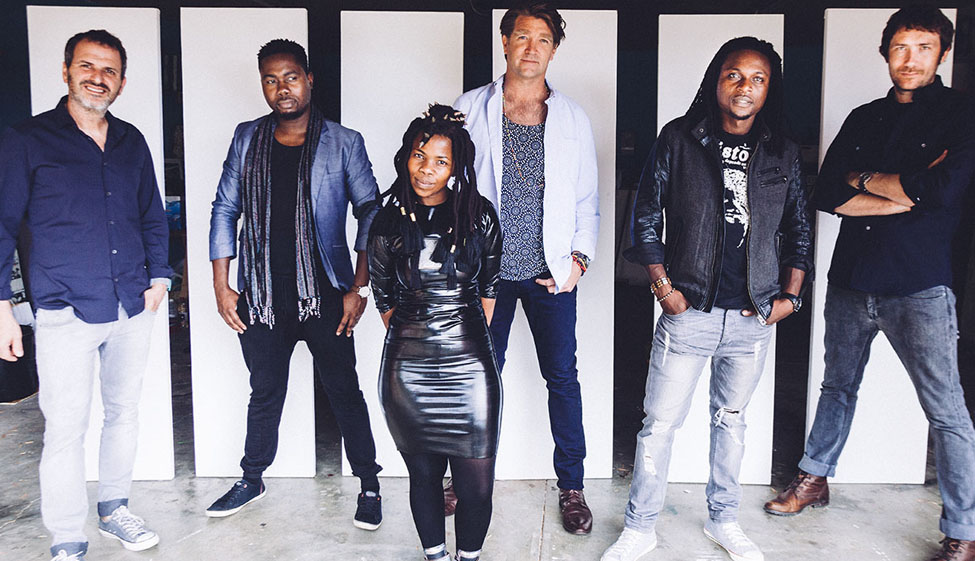 Everywhere they go, Freshlyground is a sensation. In South Africa, audiences of every race cram in to see them. Old people get up and dance. Hip black teenagers sing to their lyrics. White kids emulate their moves. The very presence of this band in South Africa is a promise of a harmonious future.

Every radio station in the country is playing their music. Through it all, the guys have maintained their sense of individual identity. Through it all they’ve kept their focus and their desire to play what reflects their uniqueness, themselves.

Freshlyground formed early 2002, and is made up of seven talented and diverse musicians from South Africa, Mozambique and Zimbabwe.

In 2003 Freshlyground launched their debut album, Jika Jika, the success of which firmly cemented the band as one of South Africa's most successful young acts. In the same year this seven-piece Cape Town based band enjoyed much wider exposure, playing at numerous music festivals including the Harare International Festival of the Arts and the Robben Island African Festival. Freshlyground were invited to Harare International Festival of the Arts 2004 as the South African representative for the Festival, where they headlined the closing ceremony, performing a song with Zimbabwean icon Oliver Mtukudzi.

Freshlyground played alongside the likes of Miriam Makeba, Stanley Clarke and Femi Kuti. In July 2004 the band performed at the prestigious Villa Celimontana Festival in Rome while taking a break from the recording studio. Freshlyground were invited to play at the Expo 2005 in Aichi, Japan in March 2005. They then travelled to Germany to front the celebration of 5 years of partnership between Cape Town and Aachen.

Freshlyground completed recording their second album in Johannesburg in June/July 2004 under their independent Freeground Records label, in conjunction with Instinct Africaine. Nomvula was recorded and produced in Johannesburg by Joe Arthur and Sibusiso Victor Masondo and released in late 2004. After a somewhat slow start - but with a strong word of mouth buzz based on the band's live performance reputation - momentum picked up as the sheer quality of the album begun to shine through.

Radio picked up on "Doo Be Doo" and the catchy song has gone on to become a favourite amongst a diverse spread of stations and their listeners. However, album tracks such as "I'd Like", "Zithande", "Things Have Changed", "Manyana" and the title track "Nomvula" (with its stunning music video directed by filmmaker Ian Gabriel) are proving the depth and strength of this remarkable record.

Fronted by the diminutive, but dynamic, Zolani Mahola, the band exudes a live performance energy that has been the bedrock of their success. The experienced rhythm section of Peter Cohen (drums) & Josh Hawks (bass) is complemented by guitarist Julio Sigauque, keyboardist (& some time dancer!) Aron Turest-Swartz, Simon Attwell (flute, mbira, sax and harmonica) and violinist Kyla Rose Smith. Although all hailing from diverse backgrounds, between them the band weave.