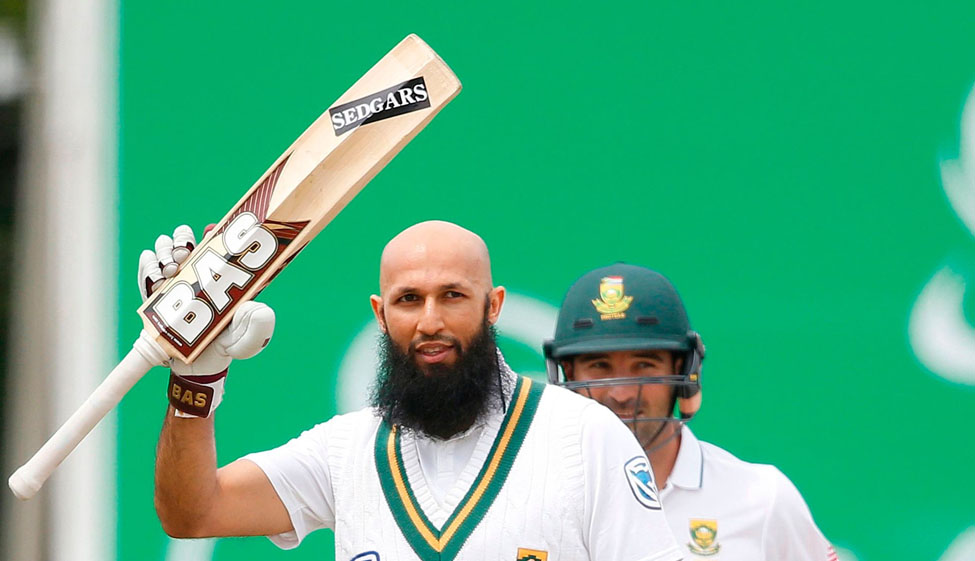 Arguably one of the most graceful and elegant people you could wish to meet, Hashim Amla is a true gentleman and a quite remarkably gifted batsman that plays for South Africa. A former captain and incredibly distinguished International player, Amla is a crucial member of the South African cricket team and has enjoyed an illustrious career that has spanned well over a decade. Amongst the most stylish batsman the game has ever seen, Hashim Amla has made quite the impact on the game of cricket and has succeeded around the world as a player and more importantly as a person. Considered as one of the most kind-hearted and endearing personalities in the cricketing world, behind an extraordinarily humble demeanour, Amla is a frightfully entertaining and mischievous character that is one widely regarded as being amongst the most popular and well respected figures within the game. A truly extraordinary personality, Hashim Amla is without doubt a legend of the game and will go down as one of the all time greats. Exuding wisdom and knowledge, Amla is an incredibly sought after cricket speaker around the world and commands and captivates huge audiences during his performances.

Amla's career began at Durban High School, the alma mater of Lance Klusener and Barry Richards, and a world away from his brother, Ahmed. Just four years apart, they grew up on either side of the Apartheid divide, which meant that Ahmed went to a school for the previously disadvantaged, while Amla was afforded better opportunity at a more prestigious institution.

After a successful school career, Amla toured New Zealand with the South African Under-19 team in 2000-01 and captained them at the 2002 Under-19 World Cup. After reeling off four centuries in his first eight innings of the 2004-05 season - in which he was also appointed, and stepped down as, Dolphins captain - he was picked to play for South Africa against India.

He was not an instant success, with serious questions emerging about his technique and his back lift as he mustered 36 runs in four innings against England later that season.

When he was handed a second chance, he made it count with 149 against New Zealand at Cape Town, helping South Africa to a draw. He remained a consistent performer, even if not as prolific as South Africa would have liked and made fifties against Pakistan in 2007. But he saved his best for the following year's tour of India, where he racked up 307 runs in three Tests. That included a majestic 159 in Chennai, his second score of 150 or more. He followed that with a pugnacious 81 in the second innings, in conditions that were trying, thanks to the weather, the pitch and the attack. In the summer of 2008, he got his name on the honours board at Lord's with a sublime century, and, in the process, silenced all whimpers about his pedigree for the longest version.

Still, doubts remained over his ability in the shorter formats, but Amla corrected that in 2010. He scored over 1,000 runs in both Test and ODI cricket. It started with a magnum opus tour of India, where the hosts threw everything at him, but could not find a way past his monk-like patience and ability to soak pressure. In the two-Test series, he scored 490 runs and was dismissed just once. In ODIs, he combined quick scoring with stunning consistency, scoring five centuries and four fifties in 15 innings, all the while scoring at over a run a ball, which saw him rise to No.1 in the ODI rankings that year.

He was promoted to South Africa's leadership core when he was named vice-captain of the ODI and T20 international teams in June 2011, and later that year, scored centuries in both Tests South Africa played against Australia at home. But Amla's crowning moment came the following year, when he got South Africa's quest to become the No.1-ranked Test team off to an epic start, spending 13 hours and 10 minutes at the Oval crease crafting a triple hundred, and not even needing a change of gloves. Amla also scored a century at Lord's as South Africa took the Test mace from the hosts.

A quickfire 196 against Australia in Perth ensured South Africa stayed on top, and in February 2013, Amla was the ICC's top-ranked Test batsman. He had also decided to keep away from captaincy promotions and stepped down as the limited-overs vice-captain.

That was why it came as a surprise when, less than 18 months later, Amla accepted the Test captaincy. His tenure was off to a solid start as South Africa beat Sri Lanka 1-0 away from home in his first series in charge, and West Indies at home in his second, in which Amla scored a double hundred in the first match. But that proved a false dawn.

Amla had taken over a team in transition and South Africa's struggles came in 2015. They lost a four-Test series in India 3-0 and returned home to lose the opening Test against England. Amla's own form also suffered and he had not crossed fifty in a year. The New Year's Test of 2016 brought a change of fortune as he scored a double hundred, having decided to give up captaincy. He announced that he was stepping down after the Test was drawn.